Two fans of two iconic 70s Saturday morning programs get together to discuss an episode each podcast. Plus, look out for special episodes with the actors and writers who made the shows possible.
Email RSS Feed
The Shazam Isis Podcast
2020
September 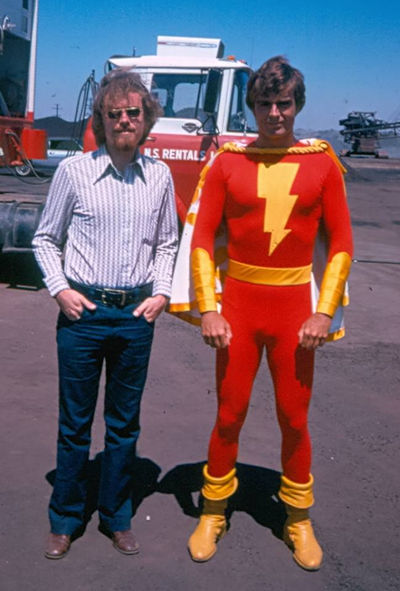 RIGHT CLICK IMAGE TO SAVE EPISODE TO YOUR COMPUTER.

The first in our series of interviews with those who worked on Shazam! and/or Isisstarts with author Donald F. Glut.  Donald is the writer of the first season Shazam! episode, "The Brain".  Donald talks with us about how the episode came about, why he never wrote for Shazam! after his highly rated episode aired, and about his near opportunity to work with Jackson Bostwick on another iconic character.

DONALD F. GLUT has been professionally active in both the entertainment and publishing industries since 1966.

Born in Pecos, Texas, Don grew up in Chicago, IL.   At age nine, already bitten by the film-making “bug,” he made Diplodocus at Large, the first of 41 amateur movies featuring dinosaurs, human monsters (Frankenstein’s Monster, Teenage Werewolf, etc.) and superheroes (Spider-Man, Captain Marvel, etc.)  Some of these films made during the late 1960s (e.g., Spy Smasher vs. the Purple Monster) were eventually shown in theatres and on TV.

Moving to Los Angeles to attend the University of Southern California, Don professionally entered show business as an “extra” (a POW) in the movie Von Ryan’s Express (1965), the first of several such “roles.”  He began his professional writing career in 1966, writing articles for and finally editing the magazine Modern Monsters. In 1967, after graduating from the University of Southern California with a BA degree (for Cinema) in Letters, Arts and Sciences, Don worked as a musician, singer and songwriter in The Penny Arkade, a rock band produced by “Monkee” Michael Nesmith.  Shortly after that he briefly furthered his acting career, having a speaking role in a national television commercial starring Dick Clark.

However, most of Don’s professional life has been as a freelance writer.  To date he has authored numerous motion picture and television scripts (Shazam!, Land of the Lost, and animation, e.g., Spider-Man & His Amazing Friends, Transformers, G.I.Joe, Duck Tales, Jonny Quest, X-Men, others), comic-book scripts (Captain America, Tarzan, etc., including creating for Gold Key Dagar the Invincible, The Occult Files of Dr. Spektor and Tragg and the Sky Gods), more than 35 novels and nonfiction books, also numerous short stories, articles, songs, album-liner notes, etc.  The Dinosaur Dictionary(1972) and Dinosaurs: The Encyclopedia (1997), two of Don’s many non-fiction books about dinosaurs, both were listed by the American Library Association among the best reference books of their years of publication. With The Dinosaur Dictionary Don created the much-imitated book format based upon an alphabetical listing of dinosaur names.  Perhaps Don is best known for his novelization of the movie The Empire Strikes Back (1980), the nation’s No. 1 bestseller for almost two months, which to date (still in print) has sold over 3.5 million copies. In 1982 he created characters and back story for Mattel’s “Masters of the Universe” toy line.  Among his more recent books is Chomper, an entry in the popular “Dinotopia” series.

Don produced, wrote and directed various videos (including the documentaries Dinosaur Movies and Hollywood Goes Ape! and the music-video compilation Dinosaur Tracks®), theatre and movie projects.  He has worked as a consultant on numerous other video,  film and TV projects, and was “Dinosaur Consultant” on Roger Corman’s movie Carnosaur (1993).

More recently, Don became president of Frontline Entertainment (www.frontlinefilms.com), for which he wrote, directed and co-produced the comedy/fantasy motion picture Dinosaur Valley Girls™, followed by a series of campy/sexy/horror movies, which have already achieved “cult movie” status, and Before La Brea, a documentary commissioned by the George C. Page Museum of La Brea Discoveries in Los Angeles.  In 2000, he was commissioned by Irena Belle Productions to direct the movie The Vampire Hunters Club, featuring an all-star genre cast.

In addition to his entertainment and publishing fields work, Glut is known internationally for his work with dinosaurs (see http://www.donglutsdinosaurs.com to see Don's "prehistoria" collection), a subject he has been seriously interested in since the age of seven.  He has lectured on dinosaurs at museums, universities and other institutions in the USA and Europe, and often appears on TV and radio talk shows, and in videos, discussing dinosaurs, monster movies and other topics.  Regularly he speaks at seminars for actors.  In 1999 and 2000, respectively, he became a volunteer at both The Field Museum (Chicago) and the Natural History Museum of Los Angeles County.

Learn even more about Donald by visting his website - http://www.donaldfglut.com/

0 Comments
Adding comments is not available at this time.
©2015